Taormina is in the Messina province, in the eastern Sicily, Italy. It is situated on a hill rising almost perpendicularly from the sea at the foot of Monte Tauro between Messina and Catania.
The ancient Tauromenium, which took its name from Monte Tauro, the site was originally occupied by the Siculi, an ancient Sicilian tribe, who were resettled there by Dionysius I, who was the Elder of Syracuse. It was made a colony by the emperor Augustus but it was destroyed by the Arabs and rebuilt by the Christians.


The most remarkable monument remaining at Taormina is the ancient theatre which is one of the most celebrated ruins in Sicily. This theatre is the second largest of its kind in Sicily (after that of Syracuse); it is frequently used for operatic and theatrical performances and for concerts. 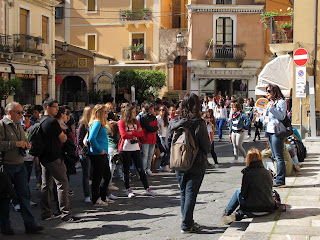 The village of Taormina is perched on a cliff overlooking the Ionian sea. Besides the ancient Greek theatre, it has many old churches, lively bars, fine restaurants, and antique shops.


It has popular beaches on the Ionian sea, which is remarkably warm and has a high salt content. Just south of Taormina is the Isola Bella, a nature reserve; and further south, situated beside a bay, is the popular seaside resort of Giardini Naxos. Tours of the Capo Sant' Andrea grottos are also available.


This information about Messina and Taormina was found in


Encyclopaedia Britannica by Blanca - Thanks!
Posted by Pilar Flores at 11:33 AM