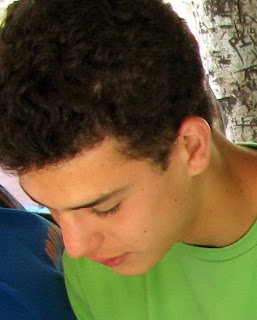 Alejandro said he was 17 years old and that he had been born in . But now he was living in a house in Gójar. He told me he lived with his parents and his sister who was older than her. He had no pets.

He said that his favourite hobby is playing football. He said he didn’t like reading so the last book he

had read was “Teacher man” because he had to!

I asked him what he did on Sundays and he answered he was sleeping all day!!!

He said he preferred evenings and he liked sunsets more than sunrises.

Alejandro said he would like to be famous and he had never met a famous person. He told me he had never worked.

When I asked him about his parents, he said his parents are friendly.