My grandfather is my inspiration

Fours years ago I was with my grandfather he asked me why he was my inspiration. I said that I did not know.
He told me to come on. I told him he was my inspiration because he was hard-working, funny and the best person I had ever met in my life.
He started to cry. Then he asked me if that was true. I answered that it was true. Then he said I would like to be him when I was older. He told me his inspiration when he had been younger had been his father for the same things. 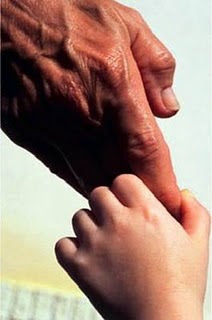