The Friar is a person who is able to get money from the people through every vicious and immoral method. Huberd, the Friar’s name, wears his common clothes (habit) in The Canterbury Tales.

The Friar’s extracurricular activities are inappropriate for one of his profession: we learn that he likes to hang out with wealthy landowners, barmaids, noblewomen, and tavern owners. St Francis, the first friar said that he would spend time with the poor and sick. But the Friar says he sees no reason for someone of his station to hang out with poor people. And finally, we learn that the Friar excels at singing competitions and debate, resolving disputes at "love days" or court days. We know that this is no proper occupation for a Friar because the narrator tells us so: in this, says Chaucer, he is not like a poor scholar friar, but more like a master or a pope. And judging from his portrait, that's probably exactly how this friar would like to be perceived. 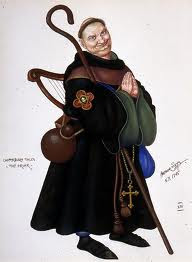 The Friar's Tale is about an archdeacon's summoner extremely adept in discovering those against whom the Church declares malevolent. The Church has strict laws against fornication, witchcraft, and lechery. Although immoral to the core, the summoner was powerful in discovering the lechers and forcing them to pay large amounts to the church. The Summoner in the group of pilgrims interrupts the Friar's tale with concern; however, the fair host allows the Friar to persist with his story. A feud has developed between these two pilgrims to Canterbury: the Friar and the Summoner. The Friar insists that his summoner would only summon those who had money to actually pay the church and would also hire the help of prostitutes, who in exchange for names of clients would be given safety. Incidentally, the summoner also hired those prostitutes for sexual services.