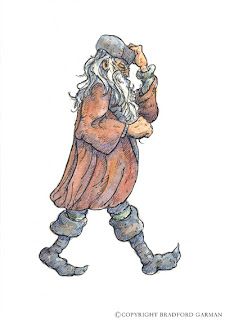 The Sea captain’s Tale suits his character. It is an immoral story narrated by a thoroughly immoral man.  The readers learn from the ‘General Prologue’ that the Sea captain is dishonest and has no qualms about stealing the wine that he is transporting for a Merchant. He owns his own ship named ‘Magdaleyne’ and is from Dartmouth. He is a tough captain and ruthless in his dealings with pirates.The beginning lines of the tale (lines 12 - 19) shows that the tale was designed for a female character, probably for the Wife of Bath where the Sea captain says that our husbands desire us to be wise and good in bed. But the tale suits the Sea captain’s character extremely well.

A merchant in the town of St. Denis had a beautiful and sociable wife.  They hosted many parties, and one of the merchant's best friends was a monk named Brother John, who was a generous man.  The merchant invited Brother John over for a holiday hospitality.  John had a moment alone with his friend's wife, and she asked him to sleep with her if he'll give her 100 francs. The next day, John met her husband, who was worried over a loan that he needs to pay.  John tells his friend that he has given his wife the money that he owed him, and the merchant happily went to fix his debt, and when he returned home, he was so happy to be debt-free that he made love to his wife all night.
When he mentioned John's 100 francs, his wife says that she used the money for worthy purposes, and that now she had a debt to her husband, and she will pay him back in the bedroom.  He laughed at her witty response, and they all lived happily ever after.
Posted by Sara.m.p at 8:22 PM