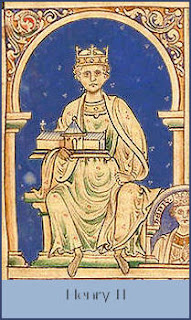 Henry II was born at Le Mans on 5 March 1133 and he died on 6 July 1189, aged 56.
Henry II ruled as King of England in 1154 when he was twenty-one. He married Eleanor of Aquitanie.
Henry was good.looking, red-haired, freckled, with a large head. He had a short, stocky body. Henry was famous for his energy. Henry spoke only Latin and French.
Henry was an energetic and sometimes ruthless ruler. Henry wanted to rebuild the terriroties that his granfather, Henry I, has once controlled. During the early years of the younger Henry's reign he restored the royal administration in England. He soon came into conflict with Louis VII and they fought over several decades. Henry expanded his empire. He undertook various legal reforms in England.
He appointed his best friend, Thomas Becket, as Archbishop of Canterbury.
Although Henry usually worked well with the Church, his desire to control and reform the relationship between the churches and Englnad led to conflict with his friend Thomas Becket. Henry became so angry with Thomas because he defended the power of the Church. As a resulte, Becket was murdered by four knights of Henry.
After the murder, King Henry II showed his sorrow and he walked barefoot through Canterbury and was whipped by the monks. He was the first pilgrim to Canterbury.
Posted by mary v at 2:28 PM