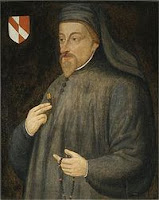 Geoffrey was born in London in about 1340, known as the Father of English literature, and he is sometimes considered the source of the English vernacular tradition. His achievement for the language can be seen as part of a general historical trend towards the creation of a vernacular literature is widely considered the greatest English poet of the Middle Ages. Among his many works, which include 'The Book of the Duchess' or the 'House of Fame', he is best known today for 'The Canterbury Tales', which is a collection of stories told by fictional pilgrims on the road to the cathedral at Canterbury; these tales would help to shape English literature.

Chaucer drew on real life for his cast of pilgrims: the innkeeper shares the name of a contemporary keeper of an inn in Southwark, and real-life identities for the Wife of Bath, the Merchant, the Man of Law and the Student have been suggested. The many jobs that Chaucer held in medieval society—page, soldier, messenger, valet, bureaucrat, foreman and administrator—probably exposed him to many of the types of people he depicted in the Tales. He was able to shape their speech and satirise their manners in what was to become popular literature among people of the same types.

He died in 1400 on 25 October and he was the first poet to have been buried in Poet's Corner of Westminster Abbey.