I was in my bedroom when, suddenly, my dad appeared and I thought: "He is the person that I was looking for."

I asked him about  his life.
He was born in Granada in February 1966. He met my mother at high school.He studied Physics at Granada University and now, he is an experimented medical physic, and he is working at Inmaculada hospital.
He was working in Madrid in the 90s, that's why I am from Madrid. In 2000, when the century changed, we changed  city.
Now, he is the father of three boys. 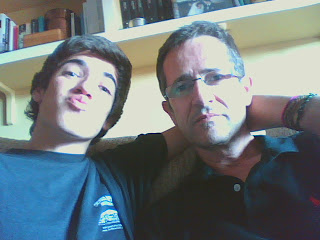 He likes reading, cycling and listening to Fito & Fitipaldis.
He doesn't like football, although he prefers Barça to wins. Nobody is perfect!!