An interview to Angelina Jolie. 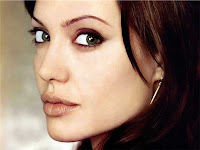 One day, I was walking in the street when I saw someone really important; she was Angelina Jolie!
That was incredible. She was sitting on a bench drinking something and  I decided to speak to her.
When I was next to her I said hello. She greeted me too.
I told her that I was a fan and that  I was really happy to meet her there. I asked her if we could speak some minutes. She accepted and she asked me to sit down beside her.
I wanted to know how her life was. She said that her life was funny but stressed too. She told me that she had been in lots of countries since she was really young. Her father was an actor too, so she had known the world of cinema really early. In fact, she added that she was in Granada making a film.
Of course, I asked her about her husband and her children. She explained me that she fell in love to Brad Pitt after she had seen him at first and that she was really happy with her children. She loved all of them in the same way, both the children she had had with Brad and the children they had adopted. I really thanked her for our conversation and I told Angelina that she was a really good person.
Posted by María del Mar Q at 9:45 PM